The 2015 Global Hunger Index reveals the need for peace to end hunger.

Now in its tenth year, the Global Hunger Index (GHI) is a tool to measure hunger globally, regionally, and by country. To do this, the GHI combines four key indicators of hunger—undernourishment, child wasting, child stunting, and child mortality—to assign scores to countries that reflect various dimensions and manifestations of hunger. The end result is a report that shows us where we are in the fight against hunger worldwide and what countries and regions face the greatest need.

In 2015, GHI scores were calculated for 117 countries. For some countries, such as Burundi, Comoros, Democratic Republic of Congo, Eritrea, Papua New Guinea, South Sudan, Sudan, and Syria, the lack of data prevented calculating GHI scores. However, the data that was available shows that the level of hunger in developing countries as a group has improved since 2000, falling by 27 percent.

Despite progress, the state of hunger in the world remains serious. This year, eight countries have GHI scores that are “alarming,” most of which are in sub-Saharan Africa. While this year did not have any country that fell in the “extremely alarming” category, this is not necessarily a sign of progress, as many countries with historically very high levels of hunger, like South Sudan and the Democratic Republic of Congo, did not have enough data for a GHI score this year.

It is not surprising that Central African Republic and Chad have high levels of hunger. Both countries have been long plagued by conflict and instability, underscoring how armed conflict and hunger are often strongly associated. While Zambia has been relatively peaceful in recent history, levels of poverty and inequality are very high in the country.

Despite these improvements, hunger still remains “serious” in all three countries. In fact, in 2000, Rwanda, Angola, and Ethiopia all had the highest GHI scores, which explains why hunger is stubbornly high. All three countries are all recovering from civil wars, once again highlighting the correlation between hunger and conflict.

While this is a tremendous achievement, our work is far from over. In the 21st century so far, the death toll from great famines is near 600,000. Today’s famines are complex humanitarian emergencies caused mostly by armed conflict. Most new wars are civil wars, which increasingly spill over borders that disrupt livelihoods and food systems, forcing people to flee. Unless the prevalence and persistence of armed conflict can be reduced, and preferably ended, and the needs of victims of conflict can be addressed, the gains will be lost.

South Sudan is a country of great promise, with rich natural resources, agricultural potential, and a young, vibrant population embarking on a newly independent future.

Widespread violence, however, has hindered the South Sudanese people from realizing their hopes and dreams.

South Sudan has experienced armed conflict almost continuously since the 1950s. The country was mired in civil war from 1983 to 2005 and formally split with the Republic of Sudan to become its own nation in 2011. To date, over 2.5 million lives have been lost and the livelihoods of tens of millions of people have been affected.

In December 2013, violence broke out in South Sudan once again, forcing people from their homes and plunging the country into chaos.

According to UNOCHA, 1.6 million South Sudanese are currently internally displaced, with an additional 628,000 people living as refugees in neighboring countries. Inside South Sudan, 4.6 million people are severely food insecure.

Currently, South Sudan is facing a hunger crisis triggered not only by late seasonal rains but also by the many consequences of this conflict, including spiraling inflation, interrupted trade, and the lack of cultivation due to displacement. These conditions have left the country’s population at risk of extreme hunger, and many fear that hunger levels in 2015 may be some of the worse they have seen in years.

Bentiu, the capital of South Sudan’s Unity State, has seen some of the worst fighting. More than 100,000 people have fled to the UN base in the city where they now face difficult living conditions without adequate shelter, water, and sanitation. Unable to return home to plant their crops, they also face food insecurity. A woman walks on a makeshift bridge over stagnant sewage water at the displacement camp on the UN base in Bentiu, South Sudan. Photo by Crystal Wells/Concern Worldwide

Concern has been responding to the needs of these refugees since January 2014 with emergency shelter, nutrition, water, and sanitation. However, long-term solutions for improving the lives of South Sudan’s displaced require enduring peace. Without a permanent end to the fighting and the stability that peace brings, refugees will be unable to return to their homes – and unable to plant their crops. With the vast majority of the nation’s population dependent on agriculture for survival, the consequences of continuing conflict will mean an uncertain future for the world’s newest nation.

View a short video on the last decade of the GHI: 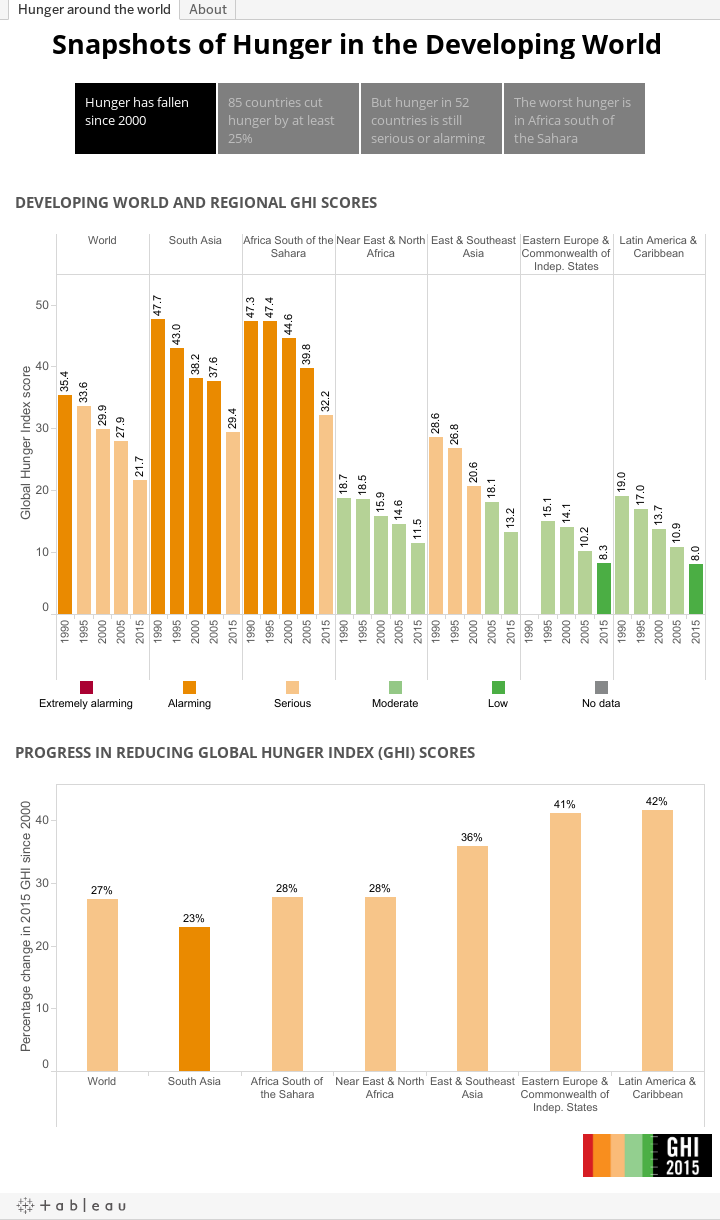 One week of life-saving food, six hungry mouths to feed — Atuil Chok faced choices no mother should have to...